Kingfish is a game about fishing! But also about breathing! And maybe a little bit about shooting?

In this game you are a scuba spear fisher,  you need to manage your oxygen levels by MANUALLY breathing (hold and release space bar). The speed at which you breath dictates the speed of the game, so slow down to catch some valuable fish or speed up to go by the small frys!

I really enjoyed this game! My record was around 500 something meters and I caught the kingfish quite quickly but I still enjoyed playing the game. The art style was fun and the idea of manually breathing was genius. Over all such a fun game with a lot of potential :D

I don't know if you've heard of Game Development World Championship before (gdwc2019) but it's a competition for indie game developers where they can submit their games and it's free! It's great if you want some more visibility for the game and it only takes a couple of minutes to join :) 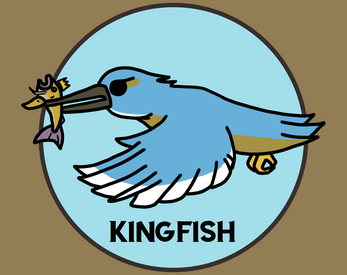